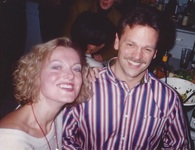 The Board of Directors of Mel Douglass Fund awards scholarships for community service achievements every year to high school seniors living in Edgewood. These scholarships honor the memory of Mel Douglass, who provided exceptional leadership and volunteer service to numerous Edgewood organizations.

Mel Douglass grew up in Edgewood, graduated from Edgewood High School in 1970 and from the University of Pittsburgh. He married his high school sweetheart, raised two wonderful children in Edgewood and launched a successful career in business. Mel actively volunteered in multiple community service roles in Edgewood ranging from volunteer fireman to Little League coach to church deacon.

These facts only hint at Mel’s true legacy, which is the wide circle of lives he enriched by his larger-than-life personality, his unquenchable enthusiasm and his commitment to serving others. Those who were lucky enough to have known Mel will never forget his spirit, his smile and his empathy for others. These are among the many reasons it was so devastating when Mel passed in an airplane accident while on a business trip in 1994.

A group of Mel’s friends established these scholarships to help Edgewood students while honoring Mel. Our long-term strategy is to sustain the Mel Douglass Fund for generations so that, every single year, Edgewood students who are making a difference get recognized and Mel’s tremendous legacy stays visible in his beloved
hometown. If you would like more information or you would like to contribute to the fund, please contact Dallas Frey at 412.371.0278 or freydk@gmail.com.