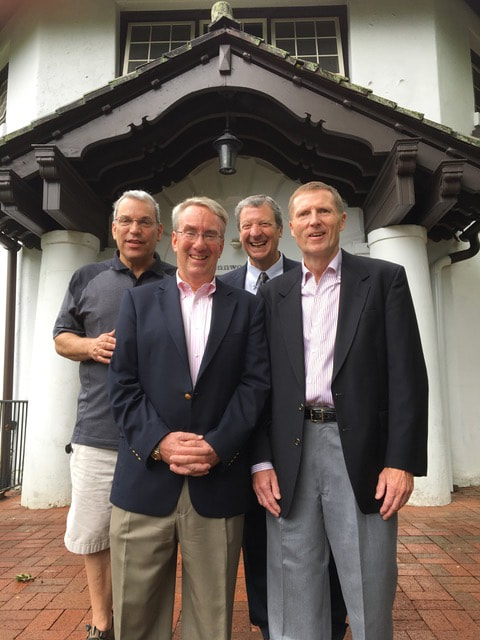 Dallas and Mel were classmates from kindergarten through high school and then attended Pitt at the same time in the early 1970s.  They grew up playing caroms and tetherball at Koenig Field and eventually were high school football teammates.  In later years, Dallas played tennis weekly with Mel and the guys in the famous Monday Night Tennis group.  Dallas enjoyed watching Mel and Nancy’s family grow up, especially after they moved back to Edgewood.
Dallas earned a Bachelor’s degree in Industrial Engineering and a Master’s degree in Business Administration at Pitt.  He spent his career at Westinghouse, starting as an engineer in 1974 and retiring as a Human Resources executive in 2011.  Dallas currently leads a small workforce consulting practice.
Over the years, Dallas has served in leadership roles for various community service organizations, including the Edgewood Foundation, radio station WYEP-FM, and SURE, the Westinghouse retirees’ organization.  In his free time, Dallas enjoys traveling, playing tennis, volunteering, and following the Pittsburgh sports teams.  He and his wife Kathy live in Edgewood and are the proud parents of their adult children, Kelly and Dallas IV.

Gregg and Mel were cousins and close friends.  Their grandmothers were sisters and their mothers were best friends.  Gregg and Mel grew up around the corner from each other and often played on Garland Street or at Koenig Field.  They were teammates on a championship Little League team coached by Mel’s father.  Gregg will never forget the grand slam home run Mel hit to win that championship.  Gregg will also never forget Mel’s contagious smile, kindness, humor, and outgoing personality.

Gregg most recently held the position of Chief Operating Officer at the Western Pennsylvania School for the Deaf.  He received his B.A. in History in 1977 and M.A. in Special Education in 1989 from the University of Pittsburgh.  Gregg began his employment as a Residential Supervisor in the Boys’ Dorm in 1973 and Dean of Boys in 1979.  He was subsequently promoted to Dean of Students, followed by Assistant Superintendent of Support Services, and finally to Chief Operating Officer.  In this role, Gregg and others opened the Scranton School for Deaf and Hard of Hearing Children.  In 2006, Gregg helped establish the Commitment to the Community as part of WPSD’s community outreach involvement.

Since his 2014 retirement and move to Murrysville, after living nearly all his life in Edgewood, Gregg is enjoying spending more time with his wife Kathy, daughter Sarah, granddaughter Evelyn, and family and friends.

Gregg retired as President and CEO after 30 years from Armstrong Development in 2012 but continued to do some consulting.  Prior to Armstrong, Gregg created and operated his own real estate company known as Baldwin & Associates for over six years.  Prior to that, Gregg worked as Vice President for National Leasing Company.  His initial job out of college was with Price Waterhouse in 1975 as a Staff Accountant.  Gregg is a graduate of Lehigh University with a B.S. in Industrial Engineering (1974) and a Master’s in Business Administration (1975).  He also maintained CPA, NASD, and Real Estate Agent Licenses.

Gregg lives in the Villages, Florida with his wife, Chris.  The have two adult sons, Bill and Charlie.

Chris and Mel played high school football together as offensive linemen for the Edgewood Vikings.  Chris also played tennis with Mel in the Monday Night Tennis group.  During that time Chris and Mel were part of a group that occasionally travelled together on weekends to play golf, relax, and enjoy some high quality camaraderie.

Chris is a Facilities Manager at Duquesne Light Company and previously held engineering and facilities roles at Gulf Oil, the University of Pittsburgh, and Robert Morris University.  He also has extensive real estate experience through his active involvement in Kefalos Real Estate, his brother Nick’s business.  Chris holds a Bachelor’s degree in Mechanical Engineering and a Master’s degree in Business Administration, both from the University of Pittsburgh.
Chris is very active in his church, St Nicholas in Oakland, and has held local and national leadership roles in efforts to advance Greek culture and faith.  Chris and his wife Anne live in Edgewood and are the parents of two adult daughters, Katie and Lisa.